Diabetes is no doubt a dreaded medical condition, especially when you consider there is no known medical cure for it. The best patients can do in most cases is to find a way to manage it. But when talking about diabetes management, you will hardly find human growth hormone (HGH) among the list of available options. It is being said that the hormone can be helpful in this regard, however, due to the effect it produces on insulin action and glucose absorption. 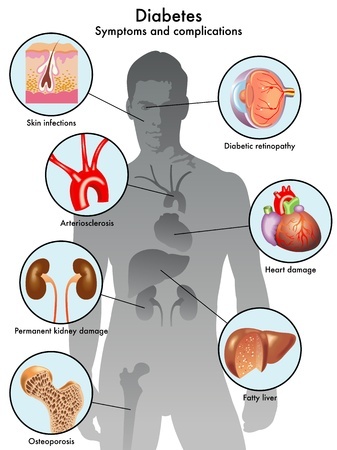 Diabetes mellitus is a medical condition which is characterized by the body’s inability to properly process. Most carbohydrates entering into the body are converted into glucose (a form of sugar), a rise in the level of which causes the hormone insulin to be secreted by the pancreas. Insulin helps to transport the glucose in the blood to parts of the body where it stored as fuel or energy until needed. There are two types of this disorder, namely: Type 1 diabetes and Type 2 diabetes. Type 1 is caused by insufficient insulin production by the pancreas, while Type 2 occurs when sufficient level of the hormone is produced but body cells have become resistant or insensitive to it causing glucose to remain in the bloodstream.

Growth hormone is sometimes described as master hormone due to the effect it produces on several other hormones and processes in the body. In the past, HGH was thought to be needed for children growth and development, but its benefits have since been observed to extend beyond this group. Among its many benefits the hormone has been identified to be useful for those with diabetes. Decline in HGH levels and increased insulin resistance become more common as people get older – as early as the 30s – and these lead to greater risk of suffering from this disorder.

Through the action of insulin-like growth factor-1 (IGF-1), human growth hormone can help with the management of diabetes. IGF-1, whose production is stimulated by the hormone, is said to produce similar action as insulin. It improves the absorption of glucose from the bloodstream. It increases the absorption of glucose by the body cells relative to absorption by adipose (fat) cells. IGF-1 offers dual benefits of blood sugar reduction and body fat burning. This ultimately results in better glucose metabolism and increased insulin sensitivity.

Studies on HGH and Diabetes

The usefulness of human growth hormone for the management of diabetes is not entirely an empty claim; there are some pieces of evidence from research to show. One of the most cited studies on this was done at John Hopkins Institute. The aim was to understand the effect HGH produces on blood sugar. It was observed in the study that elderly individuals with low HGH levels have less insulin sensitivity and greater intra-abdominal fat. The researchers concluded that the right use of growth hormone therapy can be helpful in improving these symptoms.

The benefit of HGH to diabetics was also highlighted in two double-blind studies carried out in 1997. In one of the studies conducted at the Salgrenska University Hospital, researchers administered low doses of recombinant HGH to men aged 48 to 66 years and then observed an average drop of about 18 percent in abdominal fat, which is a major causative factor of insulin resistance. The second study showed up to 45 percent decrease in insulin requirements of people with insulin-dependent diabetes.

A method has supposedly being discovered by Dr. Greg Fahy of the Naval Medical Research Institute which could be used to treat adult-onset diabetes with human growth hormone. He said personal experiments showed HGH may be a possible cure for the condition.

Available evidence, however limited, seems to indicate people with diabetes may find HGH useful in the management of diabetes. When combined with good nutrition, it offers greater benefits. Reducing blood sugar levels can help to avert diabetes complications, including diabetic retinopathy, peripheral nerve disease and cardiac disorder. If you are considering the use of recombinant growth hormone for diabetes management, it is advisable to speak with your doctor first. It has been said that HGH can cause diabetes, particularly when used inappropriately.